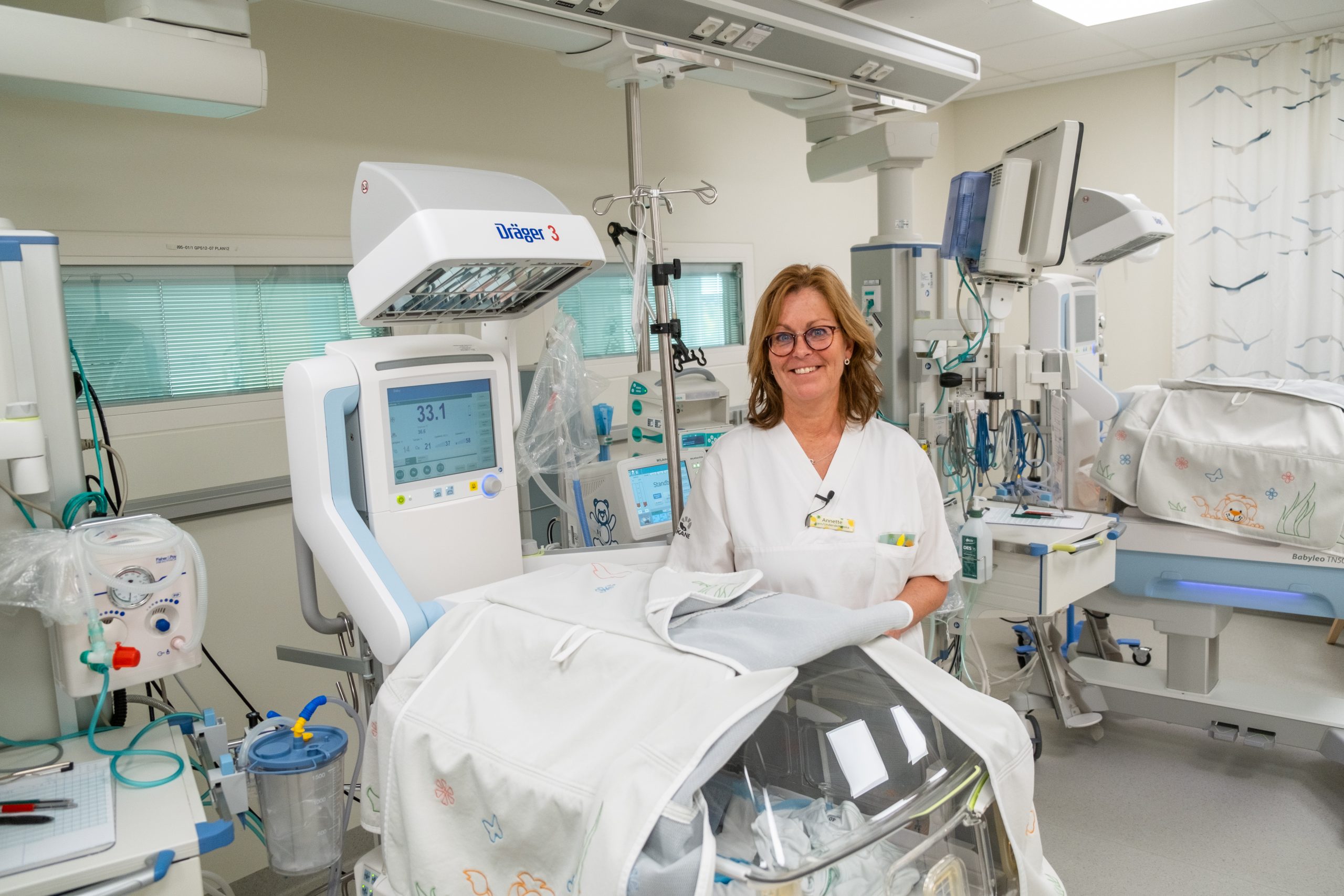 The long term goal for BrainLit is to improve the quality of life for its customers and their employees. In the hospital of Helsingborg, this vision is put to the test in a very challenging environment. The BioCentric Lighting system is provided in the neonatal ward to help prematurely born children gain the necessary strength and to assist strained parents and staff to manage the daily pressure.

– The children are extremely fragile at this state and need a lot of darkness, so having the night light on during the day helps them to adjust slowly and carefully. Their movements and facial expressions tell us when they feel better and can start to get used to daylight. For the parents, the light system is also comforting while they have to stay with their child in the intensive care rooms, nurse Annette Velin, who works in the neonatal ward, explains.

The hospital has four emergency rooms where children and parents can stay during the most critical days. Currently, the rooms are being fitted with amber lighting to complete the array of simulated natural light providing both stimulation and comfort for children and parents.

– Parents tell us about the extreme pressure of having children who are so weak that they need intensive care. But the lighting system helps them regulate how they can hold the child in their arms or have it in the incubator, which relieves some of the strain. Later, when they can move to a regular care room, they wish to keep the light. Unfortunately, this is not an option at the moment, says Annika Rosén, head of the department that contains the neonatal ward.

She has been involved in the BioCentric Lighting project at the hospital ever since it started more than two years ago. The origin was Lighting Metropolis, a cooperation between universities, private businesses and the public sector, funded by the European Union. Within the Greater Copenhagen area, the goal was to create environments to benefit general health and well-being. Annika Rosén was appointed the project manager and brought her own experience working with prematurely born children into it.

– Previously, the staff had to work in the dark with the lights extinguished to spare the strain on the children. The whole shift would be spent in the dark, now they have a work environment adapted for their tasks instead.

– Having once worked as a nurse in the neonatal ward, I knew how vital good light conditions are for the children. They have not yet developed enough to withstand bright lights and loud noises, so being able to set the light to follow the different times of the day and the care situation was a wonderful opportunity, Annika Rosén remembers.

BioCentric Lighting and BrainLit were still in its early stages when the project started, which made the system and the company grow and adjust to the very demanding task to help fragile children and distraught parents manage their ordeal. The system was tested in different environments and adapted to these very particular requests with physicians and light designers working together, creating the perfect light recipe. In March of 2018 the neonatal ward moved into its new premises, equipped with BioCentric Lighting.

– Previously, the staff had to work in the dark with the lights extinguished to spare the strain on the children. The whole shift would be spent in the dark, now they have a work environment adapted for their tasks instead, Annika Rosén says.

The night shift at the neonatal ward works from 21.00 to 07.00. In winter, they may not see natural light at all, since they need to sleep when their shift is over. The circadian rhythm is disrupted – the very problem BioCentric Lighting was invented to help people working indoors coping with. So apart from the emergency rooms having luminaires adapted to the needs of the children and parents, the staff has a meeting room equipped with a light shower.

– In the wolf hour between 03 and 04 at night, up to four people can simultaneously have a shower of bright light fitted to make us more energized for another hour or two. We feel more awake and the legs stop tingling. When I first heard about BioCentric Lighting, I found it hard to believe. But the more you learn, the more amazing it becomes, nurse Annette Velin says.

The EU sponsored project is over, but the partnership between BrainLit and Helsingborg hospital is only beginning. As the hospital is being modernized, BioCentric Lighting is installed in another two floors of its new wing.

– My wish is for other hospitals to benefit from our partnership here and the new knowledge it has produced. Hospitals all over the region can improve their care of patients as well as promoting the well-being of their staff by using our model, Annika Rosén concludes.